If there’s any market in the mountain biking world that’s saturated with choice, it’s got to be the tyres.  Off the top of my head, I can think of six different brands, all with at least 10 tyres in their range.  So which one is right for you?

Your tyre choice depends on a few different, but equally important factors: the type of riding, location, conditions, and whether you’re racing.  For example, the tyre used by a downhiller riding in a wet climate will be vastly different from that of a cross country racer in a dry area like Alice Springs.

If you’re commonly riding in the rain, the most important thing is mud clearance, generally provided by widely spaced, tall lugs.  If you run a smoother tyre in muddy conditions, it just gunks up straight away and you might as well come to the trails on a bald road tyre. 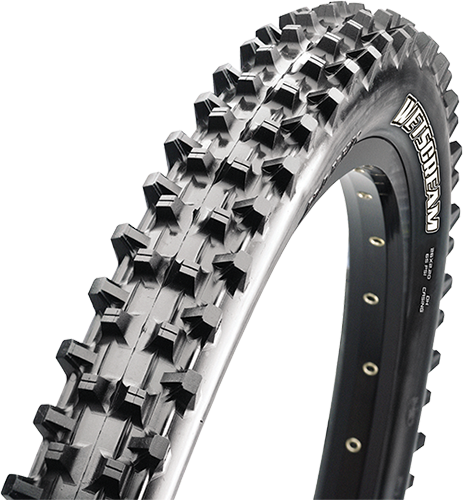 If you’re riding in the wet, look for larger, more widely-spaced knobs, relative to the standard tyres of your discipline.

Another important consideration is whether or not you’re racing cross country.  Most tyre manufacturers include a super light weight tyre in their range, and whilst these add next to no weight to the bike, they are far more prone to punctures, and there is no better way to ruin a day on the bike than three busted tubes in single run.

Whilst it definitely doesn’t hold true in all situations, the general rule of thumb is that the more downhill you’re pointed, the chunkier tyres you need.  If you’re a downhill racer you need an aggressive tyre with loads of grip, especially for cornering, so look for wide knobs on the side of the tyre to dig into the dirt as you rip around corners at high speeds.  Generally if you ride trail or enduro, you’re looking for the same features as a downhill tyre, just on a smaller scale.  An all-mountain tyre will have shorter lugs that still provide traction but also generate less rolling resistance.  A cross country tread pattern is just another step down, with an even smoother surface to minimise the chief concern of rolling resistance. 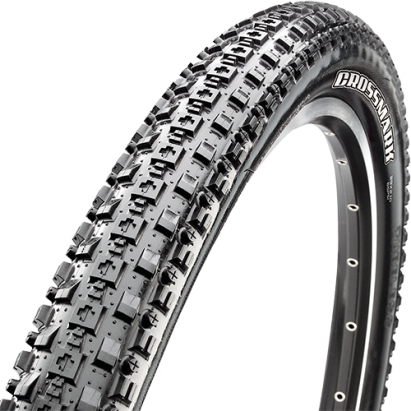 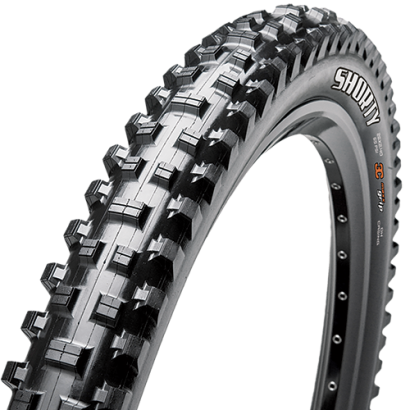 A typical XC tyre (left) compared to its downhill counterpart.

The central tread of a tyre is less about grip and more to do with rolling resistance and how the tyre tracks under braking.  The general rule mentioned above also applies to this part of the tyre as well – the beefiest tyres being for downhill riding.  Larger central knobs will give the greatest breaking performance, but generate the largest rolling resistance.  As you work down toward cross country tyres, again the central lugs get smaller and smaller.   However, there are some less typical tread patterns that use a smaller knob on the central tread with a larger knob on the edge, and they work well in specific conditions.  For example, a popular tyre among trail riders in dusty conditions is the Maxxis Minion SS, a tyre with a cross country central pattern, and downhill side knobs.

The type of surface you usually ride on, whether it be rocks, hardpack, loose or a combination of these, has a huge impact on the type of tyre you should be running.  If you ride hard-packed dirt, grip is less important than rolling resistance, so you can opt for a slightly faster tyre.  If you ride loose rocky terrain then you probably don’t care about how many watts you’re losing to resistance.  Be sure to pick the right type of tyre for the terrain you ride.  If you ride cross country over loose terrain, chances are that you’ll need beefier tyres than someone who rides well manicured trails.

Here’s a few suggestions to help you decide which tyres are right for you, or view the whole range of tyres: