Carbon fibre: is it worth the extra money?

The frame around which your bike is built is one of the most important factors in determining how your bike rides, so you should put some consideration into what it’s made of. The two most common materials are carbon fibre and alloy, specifically aluminium alloy. Carbon is often being touted as the better choice, but is the extra expense really worth it? 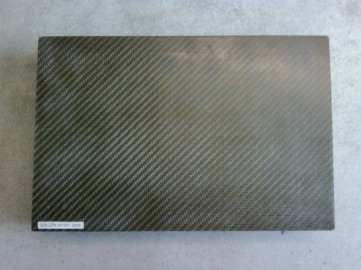 Carbon fibre has been the staple frame material for the past two decades. In fact, it has been so popular that a Tour de France has not been won on any other material since 1998. So what has carbon fibre got that everything else doesn’t?

Carbon fibre is the go-to material for aerospace and mechanical engineers when they need something light and strong. Therefore, according to Bontrager’s Triangle, carbon fibre doesn’t come cheap. 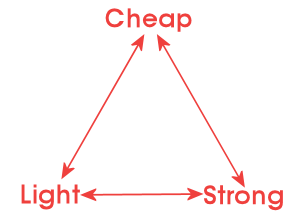 The nuances of carbon fibre and its construction is a rabbit hole that many an engineer falls down, never to emerge. Fortunately for cyclists, to get a good frame, we need only to have an appreciation for the very basics.

Due to the nature of carbon fibre, it’s production is far more labour intensive, resulting in higher production costs, which in turn are passed on to us. Carbon fibre is made up of two parts: thousands of individual threads of carbon filaments, bonded together with an epoxy resin.

Modern planes are constructed of over 50% carbon fibre (2)

Due to different methods of construction, there are multiple grades of carbon fibre. However, for all intents and purposes, the grade stated by the company is irrelevant. There is an objective scale set by the Japanese Carbon Fiber Manufacturers Association (JCMA), and unless your bike frame is being described as Standard, Intermediate or High Elastic Modulus Type Carbon Fibre (EMTCF), it’s a sales technique designed to sell you bikes and means nothing more. Almost all bike manufacturers use the same grade, Standard, with only the most expensive frames using High EMTCF. It’s common practice for companies to manipulate the nomenclature of the grading system, describing their bikes as high-mod, or UHM, giving the impression that it’s a higher grader of carbon, but in reality it’s the same grade as everyone else. If you really want to know, the spec sheet will tell you the actual grade.

What really matters however, is the lay up. Carbon fibre has two great things about it, it has an incredibly high tensile strength to weight ratio, and its strength and where it exerts it can be specifically manipulated. A property known as anisotropism. This means that frames can be designed to be strong where they need to be strong, and lightweight where they don’t. So much so in fact, that on Trek’s lightest production bike, the Emonda, you can literally squeeze the top tube between your fingers. This, and the research associated with it, is what makes carbon fibre bikes so expensive, but also what makes them so popular. Stiffer, lighter bikes – what more could you want, right?

The truth is, we ride carbon because everyone in the pro peloton does, so we’re convinced it’s the best, but is carbon really the best material for you?

The optimisation of frame design that is only possible with carbon fibre produces bikes that are around 300 grams lighter than a comparable alloy counterpart. Coincidently, this is about the amount of weight you could lose from riding your bike regularly for a week or two. It isn’t like you can’t get lightweight alloy bikes either. Using a Cannondale CAAD12 frame, you can easily build up a bike to be under the UCI minimum weight limit of 6.8 kilograms, for considerably less money. The only other factor that many people take into consideration when choosing frames is the stiffness. Carbon bikes are stiff, meaning they transfer power better. Stiffness, which is actually a measure of elasticity, is highest in carbon bikes, but a modern alloy bike is stiff enough so that anyone who isn’t racing bikes for a living will not feel any noticeable difference.

If you’re looking for every advantage you can get, carbon does have the edge over alloy. It’s lighter, stiffer and more aerodynamic. However, consider your type of riding, frequency and reasons for choosing your bike before opting for carbon fibre right away – depending on those factors, you may not even notice the benefits of the carbon frame enough to warrant the extra expense, so you might be better off saving the money and opting for an alloy frame with higher quality components instead.