How to fuel correctly and recover faster

Unfortunately, there is no defined answer to the questions, ‘What food should I take with me on the bike?’ and ‘What should I do to recover faster?’  There’s a lot of pseudo-science out there, and unfortunately not a lot in-depth research backing it.  Recently though, some scientific studies have cast a light on the dim area of cycling and exercise nutrition, and the results may surprise you.

When you’re unsure how to supplement your energy needs while on the bike, it’s often good to start by knowing what you shouldn’t do.  One thing you should avoid is consuming protein whilst riding.  One of the discussions you’ll see thrown around in the cycling industry recently is around ways to reduce recovery time.  Pro teams are always searching for the latest and greatest way to get their athletes back on the bike as fast as possible.  The newest marketed theory is that if you take protein supplements with your energy gels, then you’ll be able to perform at a higher level the next day.  However, this has been shown to be false.  There is just no concrete evidence to support the claim that proteins, when taken during a ride, will help you perform or recover better (1).  So when you’re riding, you would be better off avoiding proteins.  You’re just making expensive urine.

Some simple tips to remember throughout your training: 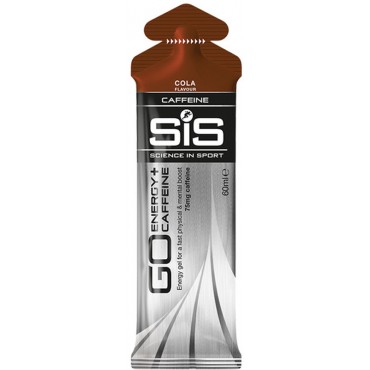 The best way to fuel is caffeine-laced carbohydrates, in the form of gels or fluids.  Carbohydrates help prevent ‘bonking,’ by maintaining whats known as ‘euglycemia,’ your normal blood glucose levels.  Alongside this, caffeine, that legal addictive stimulant that we all know and love, has been shown to increase time to exhaustion in cyclists, by increasing the release of calcium in your muscles.  This causes an increased contractile force and spares your glucose reserves.  The two compounds, caffeine and carbohydrates, have been shown to give a better result when taken together than if either was taken separately (2).  If you’re riding for more than 90 minutes, you’re looking at between 2 to 3 gels per hour, depending on how fast you use energy, and it’s ideal to be using caffeine-laced gels.  To see a performance enhancement, you should be consuming 6mg of caffeine per kilogram of your body weight.  Most gels have about 75mg of caffeine; don’t worry about all this extra caffeine though, you can safely have more than you might think.  On the scale of addictive substances, caffeine is pretty low, with no serious withdrawal symptoms.  Contrary to popular belief, the long term consumption of up to five cups per day has been shown to have no effect on your risk of cancer, cardiovascular disease or dysrhythmia (palpitations) (3). However, be sensible.  If you have a pre-existing heart condition, or any other condition that can be triggered or worsened by caffeine, then you should avoid it.  Even if you are healthy, make sure you don’t exceed 250mg of caffeine per day, so keep it to a max of three caffeine gels.  And stay off the emergency Redbulls.

People will tell you that what you eat after a ride is as important as what you eat during a ride.  We’ve all heard about the anabolic window.  You know, that 30-minute, critical period after a workout or training session where you need to get as much protein into you as is physically possible to maximise your gains and/or minimise your recovery time? Yeah, probably not a thing. 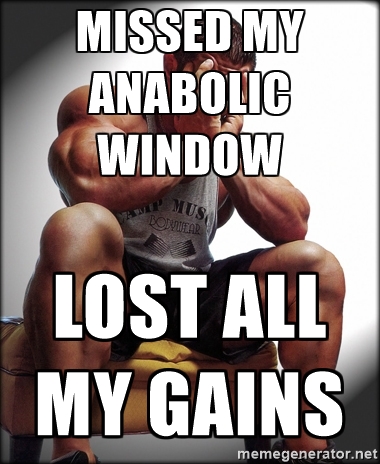 Don’t worry mate, it wasn’t going to help you anyway.

The primary goal of post exercise nutrition is to replenish glycogen stores and repair muscle tissue, and the theory goes that in this period of time, your muscles are ripe for repair.  Now, it is true that eating after exercise does help with tissue repair, but two things differ from the standard rhetoric of a 30-minute protein window.  First thing wrong is the length of time.  You’ve actually got a 2-hour period after exercise where your body has placed additional glucose receptors, known as GLUT4 receptors, onto the surface of some of your cells, which facilitates additional glucose uptake.  Also, this means your meal needs to contain a lot of carbs, because protein won’t restore your energy supplies by itself.  Protein has been shown to aid with the post-ride recovery, so its definitely important to get some into you.  However, there is one vital caveat: unless you’re going to be riding or training again within 8 hours of the original event, you don’t need to worry about this 2-hour window at all.  After this period, your body recovers naturally to its original levels anyway (4).

So in the end, fueling right is pretty much a common sense thing.  Take gels with you on a ride, and eat a healthy meal after you finish.  If you leave at least 24 hours before your next ride, you’ll be as ready as you can be for that next spin.  At the level most of us ride at, inconsequential changes to your diet won’t stop your legs from hurting, only more training can do that.