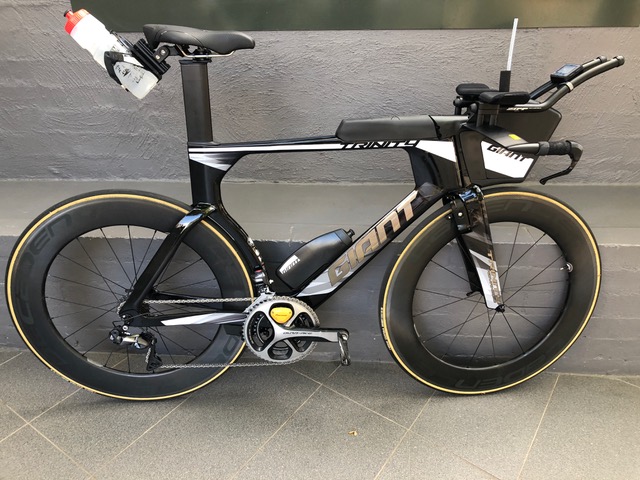 Having been on the 2017 addition which I did a review on in May last year, I have just upgraded to the 2018 edition Trinity Advanced Pro 1. I will cover the differences with the new model, and some of the things I have found over the last 12 months of riding.

The 2018 bike is essentially the same frame but has the new generation Shimano Ultegra Di2 groupset. The new Ultegra comes with the new shadow rear derailleur which can take a larger-range cassette; the stock cassette is 11-30t, making the steeper hills much more manageable. The groupset also now has synchro shifting; the synchro will change the front derailleur automatically, hence now there are just single buttons to control the rear derailleur on the base bar and aerobars (much smaller controls than the previous generation). The Giant Pa-2 wheelset, which also comes stock, has been redesigned, offering a deeper rim with a tubeless set up (tubes can still be used if preferred). Giant’s sealant is also included, to be used in conjunction with the tubeless setup.

One other difference for 2018, is that the bike comes with two stems – one is 30mm raised and one is flat. This provides the option of having a higher base bar and less spacers under the arm pads. The flat stem is the same as the standard stem on the 2017 models.

The Giant trinity is a much better engineered product than the pre-2015 frameset. I have had none of the issues with brake adjustment, seatpost spacers, or nose cone bolts that frequently occurred with the previous model. One recommendation I will make is to swap the straw on the front-mounted bottle with a wider straw; the small straw takes a lot of energy to drink from so one with more flow helps a lot.

The 2018 Giant Trinity Advanced Pro 1 can be purchased through Pushys Fyshwick.

View all posts by ridersguideblog